Not sure that it’s really my dream to hang out with US President Donald Trump, but last night I literally…

Not sure that it’s really my dream to hang out with US President Donald Trump, but last night I literally dreamt that I was accompanying the Donald on a trip to China where he insisted on checking out the affects of Coronavirus for himself.

It must have been somewhere in Hubei province where we visited a quarantined area that housed a few hundred children. It was night and raining. The kids were sleeping in rather dystopian looking structure made out of layers of of wood platforms stacked on top of each other with only about 2 or 3 feet between each platform.

The man in charge sat just outside the structure on the ground in the rain and explained us of the poor conditions but he was speaking Chinese and there was no translator. On our way out, in a large metal elevator, Donald handed me his phone to look at something. Of course, I couldn’t make out any details because it was a dream but I remember the phone was about 4 times as thick as a regular smartphone and had large built in speakers.

The President mostly ignored me the rest of the trip, especially when I advised him that we should quarantine ourselves when we get back. As he didn’t respond I asked his daughter Melody, who oddly resembled Maya Hawke from Stranger Things, sailor suit and all. Melody assured me that her father would definitely not take the extra time, which worried me given the President’s exposure to very powerful people. I then proceeded to impress her with my rad bike-riding skills.

Don’t ask me what any of this means, I haven’t ridden a bike in years. Funny enough, my dream with Angela Merkel a while ago had a similar result. I was trying to explain her something important and she completely ignored me. Go figure.

Meanwhile, back in reality. The situation in the stock market has gotten so bad that the President has taken time off his Indian tour to reassure investors and try to calm their nerves. 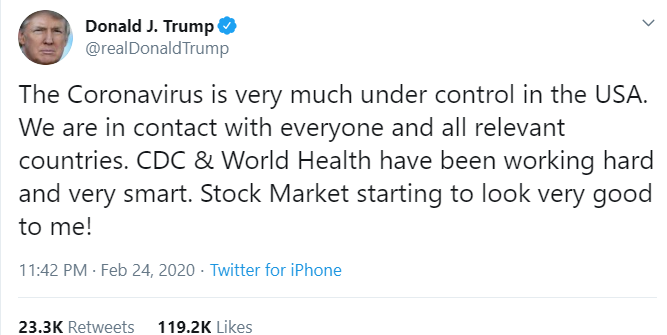 There are many headlines and highlights about just how bad the drop was yesterday. The Dow Jones dropped more than 1000 points in what is being considered as the worst drop in two years. How could nobody have seen this coming, really?!

Volatility has spiked to its highest level since 2018 when the Fed was trying to raise interest rates. Here we can see the VIX volatility index (AKA: the fear gauge) over the last five years. We’re nearly at Brexit levels now. 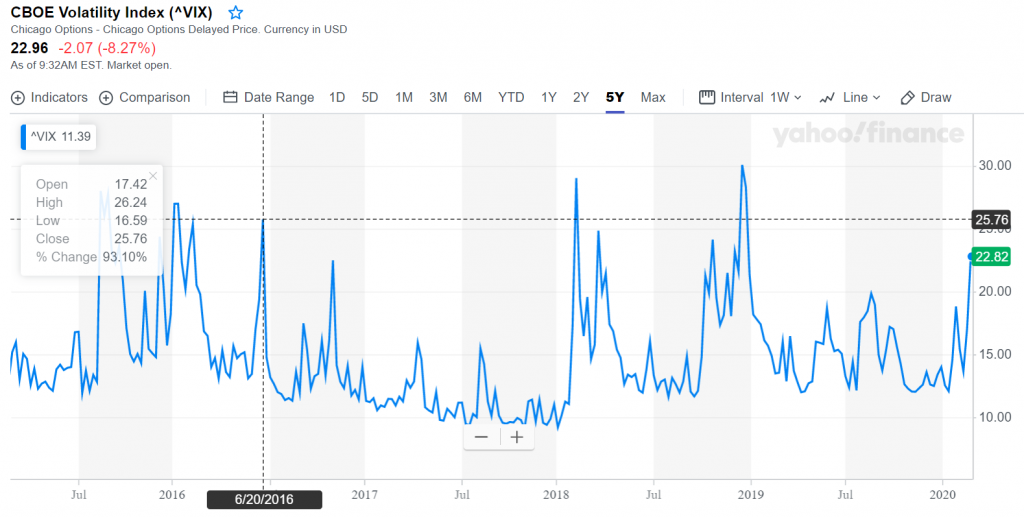 The reason volatility is so high at the moment is that there’s a war going on. It’s not all one directional movement anymore. Bears are obviously trying to price in some very relevant risks, while bulls are busy doing what they’ve been trained to do for the last decade, buy the dip.

…at least for now.

You see, it’s all about context. Is bitcoin a safe-haven or a risk asset? The answer depends entirely on your perspective. If you’re a trader on Wall Street or even a retail speculator, it’s clearly a risk asset. If you’re a citizen of a country who’s money is rapidly declining, it’s undoubtedly a safe haven.

Especially, when factoring very short term movements that can be dominated by traders rather than hodlers, there was a moment yesterday that I had an epiphany. Managed to catch it in this graph… 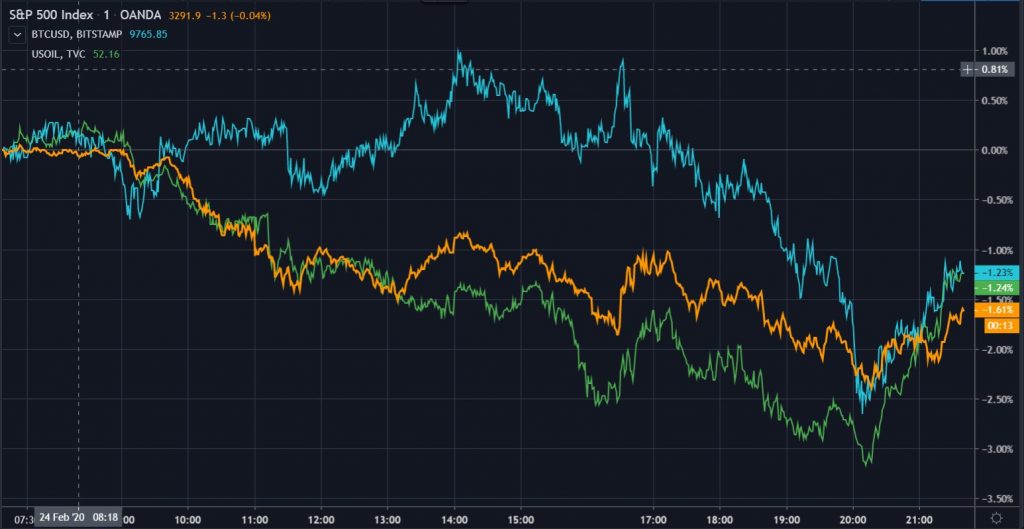 Just as everything was falling there was a sudden bounce off the lows. Bitcoin (blue line) actually bounced slightly before the stocks and crude oil, but what’s clear here is that the nascent asset is moving inline with the risk assets, almost to a T.

To fully grasp why it wold do that, we really need to understand the reasoning behind the market’s behavior these last few weeks. Mainly, that they’ve been ignoring risk due to the promise of free money. Meaning, corporate profits will be ok in the long run because they’ll always be able to borrow more money. This white lie has allowed all risk assets to continue to rise, including bitcoin.

Meanwhile, the risk was being priced in elsewhere. Namely, in the safe haven assets. Gold, bonds, and yup you guessed it, bitcoin.

The declines so far this week have mainly been focused on profits and earnings. The realization that if the risks do end up growing free money might not be enough to get us where we need. So we see some declines.

Bitcoin however, is not a safe haven against declining profits.

So far, the stocks don’t seem to have realized any of these threats.

This is how I see the recent activity lately anyway. You’re more than welcome to agree or disagree. Have a wonderful day.