The big news for the markets came in last night that Coronavirus has taken their first known major corporate victim… Apple.

It was all fun and games when Nintendo said there won’t be enough Switches to go around, but iPhones? That’s a bit closer to home for many traders on Wall Street. Global markets are feeling the heat today. Please reference yesterday’s email on possible worst case Coronavirus scenarios.

In any case, enough doom and gloom. Today, I wanted to bring back the discussion of a Digital Dollar, and the possibilities thereof. Especially since there’s been a lot of talk about this in the last few days. Over the last few days, we’ve received some very serious indications that the Federal Reserve is rethinking their “we don’t want it or need it” stance.

The first such indication was at a closed door event in Texas last week. These statements might have gone completely unnoticed if not for one of the attendants, Brent McMinn, who I bumped into on Twitter per chance and practically begged him to transcribe. Thanks a lot for the Medium Brent!!

In short, the President of the Dallas Federal Reserve Bank seems to have mumbled his way through a scenario that’s been fundamental to our worldview for almost a year. Namely, that the lack of innovation on the part of the United States and failure to digitize the Dollar could lead to a black swan event.

Second, from the head hancho himself, Jerome Powell, who at the last Fed meeting took some rather interesting questions about the prospect of a digital Buck. Thanks to BeinCrypto for reporting in this article the timestamp on the embedded video is: 1:43:00

To me, it almost seemed almost like Chairman Powell showed genuine fear for the US Dollar’s place in society. Also, when he said that they’re working hard on it and that they have an open dialoge about CBDCs with China, I wasn’t quite convinced. I’ll let you watch and judge for yourself though.

To be perfectly honest, I wasn’t too sure until just now when I started writing this passage, looked at the markets and whoa boy!!

Unfortunately, I don’t have much more to elaborate on this. What I did want to call your attention to though, is that the Golden Cross formation that we’ve been waiting for these last two weeks has come through today.

As we can see here, the short term moving average (orange line), has crossed over the long term moving average (blue line). This is considered an extremely bullish chart formation because it indicates that the bottom may be in and the trend is turning from bearish to bullish. For more on this pattern, check this video and article on Investopedia. 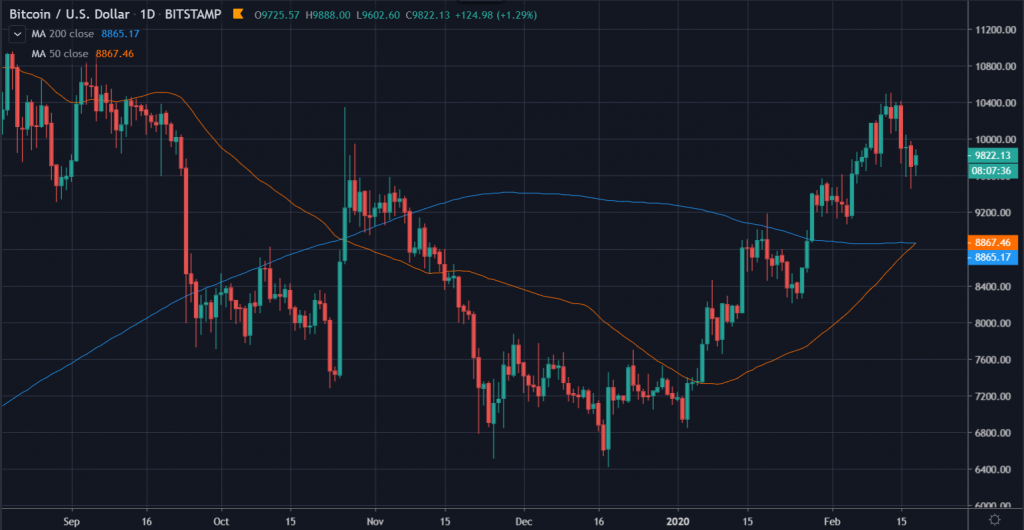 One last thing before I let you go for today. The Democratic primary debates tonight should be quite interesting and might possibly represent the last stand for capitalism for half of the US population. It seems like Bernie the self-proclaimed socialist is consolidating gains within the party but a new challenger is coming to life tonight, capitalist Mike Bloomberg. As this will be Bloomberg’s first public debate, it will be interesting to see how he handles it and if capitalism still has a fighting chance within liberal circles.