Eating Each Other Never really got the chance to review the Democratic debates the other day. Probably for the best…

Never really got the chance to review the Democratic debates the other day. Probably for the best though. Watching these people ‘debate’ each other is kind of like watch a tank full of hungry cannibalistic sharks eating each other. Or like a Roman gladiator tournament. You get a bit queasy but man, that’s good entertainment.

Good thing we get to see them doing it again next Tuesday. Nobody’s happier of course, than Donald Trump who’s clearly the main benefactor of Democratic infighting. The issue here isn’t that the Democrats are trying to pick the best candidate to represent their vision. It’s that each candidate has a completely different vision and the party doesn’t know which direction to take.

The more each individual progresses, the worse off the party is. If Sanders doesn’t take the ticket, you can bet his supporters will stay at home in November. Any new supporters that Warren or Bloomberg or the others bring on, would be less likely to vote for Sanders.

Nevertheless, the stock market has been falling the last few days. I’ve personally taken out a small money, high leverage, short on the Nasdaq and long on gold portfolio recently as I don’t believe the Coronavirus is accurately priced into the markets. Also, I feel like investors might get nervous that the Fed stimulus is set to expire in April. 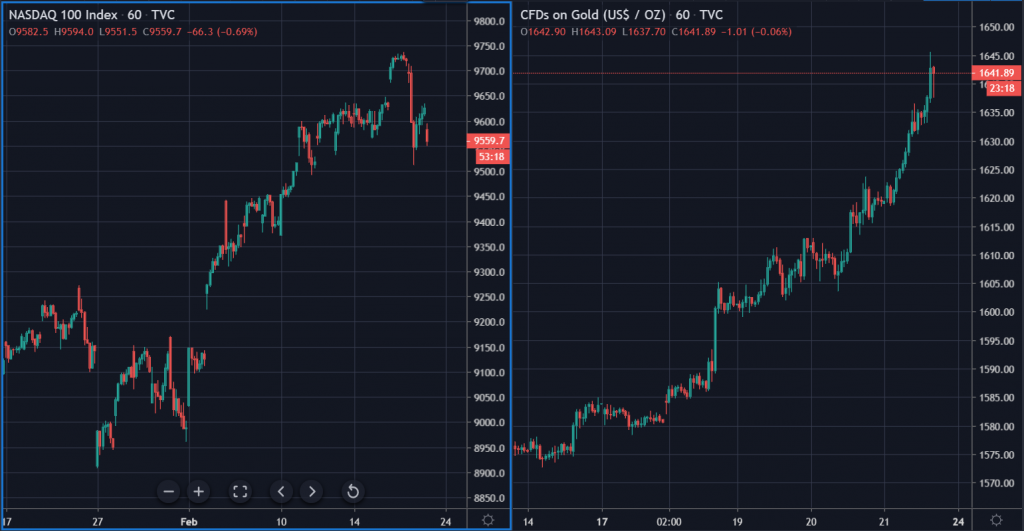 Gold has been out of control lately and currently trading at its highest level since 2013. The only real explanation for this is that people are fearful from central bank actions and are looking for a way to hedge their portfolio.

Here’s an interesting video that I watched today from someone I’ve been following on Twitter for the last few years but never knew his name until today. The presentation really shows how much gold bugs and bitcoin fans have in common. So, check that out here.

As the crypto market consolidates and volumes cool down, seeing how the price progresses over the weekend could be interesting. The markets had been behaving by the books for most of the year so I guess that makes it even more surprising when something does happen. Still, sentiment doesn’t seem to be affected too much with many thinking that this was simply some temporary movement caused by large players.