As we indicated yesterday, there’s now light at the end of the tunnel. However, as it seems a working vaccination…

As we indicated yesterday, there’s now light at the end of the tunnel. However, as it seems a working vaccination might still be a few months away so things are likely to get a lot worse before they get better.

After discussing with a medical professional, it does seem that COVID-19 is indeed a strain of the flu. So it’s most likely to go away when the weather turns better and by next year, the cure can be included in our regular flu shots.

From the data provided, it seems like China (orange) has already seen the worst of it and it is now starting to spread in other locations (yellow). This chart is in log scale to better accentuate percentage changes. As well, my friend in Shanghai tells me life is slowly returning to normal, which is also a good sign.

Now that the initial panic has somewhat subsided, let’s take a look at some of the numbers. Of the closed cases, the fatality rate does seem pretty high at 7%. Of the active cases, there are still about 8,000 in serious or critical condition.

So, in total there are 10,958 cases that have either resulted in travesty or are still causing serious pain. Given the size of China this doesn’t seem like a whole lot. In fact, it’s less than %0.0008 of the total population. Though it’s sad for the victims, it hardly seems worth losing our heads. Especially when the regular flu generally claims a quarter to a half a million lives every year.

The issue however, as pointed out by someone on my feed this morning, it’s not the total numbers but the rate of infection that’s particularly scary. Healthcare services are usually prepared to handle the flu season when it lasts 5 months, but when they come all at once, it can cause congestion (no pun intended) like we saw in the images out of Wuhan at the beginning of the month.

The markets of course, have much deeper concerns at the moment…. 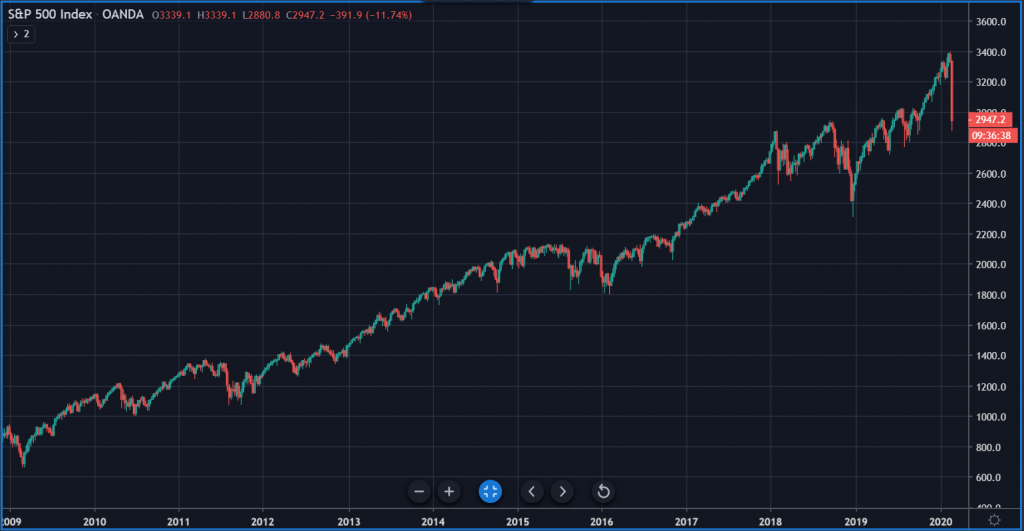 Still, even though a 13% pullback from the all time high might seem terrible, the real question is…

The chart above is showing one of the longest and possibly the strongest bull market in known history. In addition, as we pointed out last week, stocks are not trading at the current value of the companies they represent, but rather on their forward looking profits, which may be years in the future.

Even just from the chart though, we can see that the action this week has brought the market back to where it topped out in September 2018, a total of 15 months ago. Personally, I’m not convinced that one month of economic inactivity should be worth 15 months of gains.

If indeed productivity in China is returning to full capacity that means that the supply shock, which was my greatest concern, has probably been avoided.

The greater danger here is if somehow this particularly volatile week actually becomes the catalyst for some deeper soul searching. At this point, the market has to take a good long look in the mirror and ask some itself serious questions. Hope it likes what it sees. 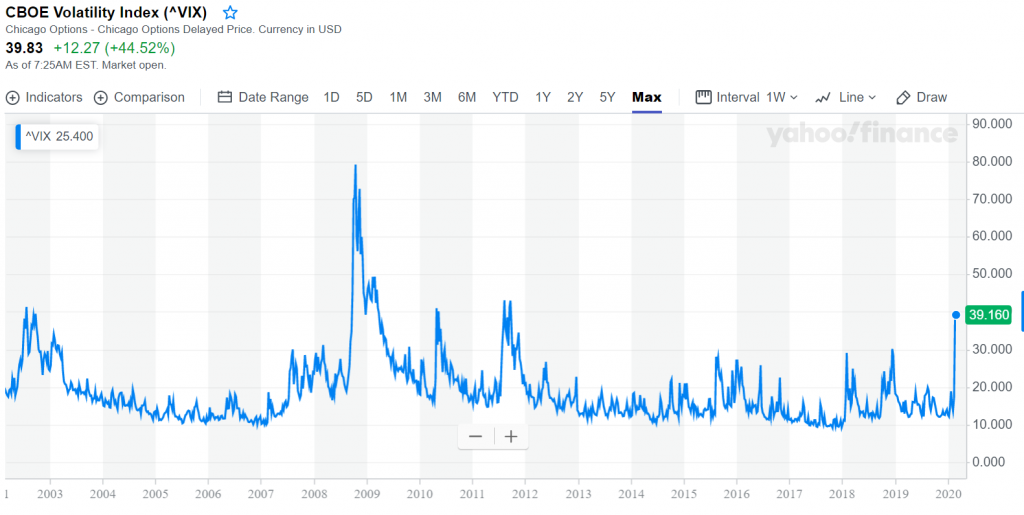 For all it’s non-correlated properties it does seem like bitcoin and the rest of the crypto market has been caught up in all of this. What’s even more upsetting is due to the global nature of this event we won’t really get to know if bitcoin is now more correlated with traditional markets due to a higher level of institutionalization or if it’s simply unrelated and they’re both reacting separately to the news. 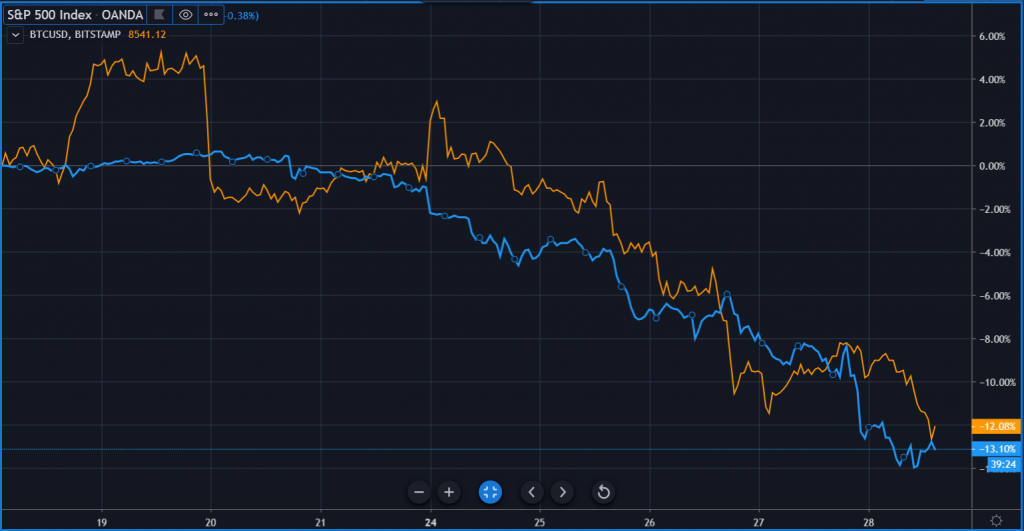 As for bitcoin, the 200 DMA now seems to be busted and at the time of this writing we’re testing $8,500. As previously indicated we also can probably expect some support at $8,200 as well.

There doesn’t seem to be much place to hide or store value at all in this market. Just as gold is dropping today. DeFi loans are also coming off the table. Even though the pullback has caused the small and nascent market to lose a lot of steam, the size of the drop somehow doesn’t seem as severe as it does in other markets.

Even though in percentage terms the pullback from the peak (23%) is double what it is in other markets, the amount of time setback is only 3 weeks.

These Sites Are The Way To Buy Cheapest Bitcoin

Is It Safe and Legit? (Read before Using)