Microsoft, Google, Adobe, and Facebook have all announced new Coronavirus casualties, along with the world’s biggest mobile phone show, the…

Microsoft, Google, Adobe, and Facebook have all announced new Coronavirus casualties, along with the world’s biggest mobile phone show, the Game Developer’s Conference, and now Korea’s League of Legends Champions have all cancelled, postponed, or re-branded their conferences into online events.

Still unclear if the Tokyo Olympics or the annual Muslim pilgrimage known as Haj, will proceed on schedule.

Last night, the Reserve Bank of Australia has performed an emergency rate cut. Interest rates in Australia are now at an all time record low… by far.

The United States Federal Reserve is widely expected to follow suit with not one but two quarter point rate cuts when they meet in two weeks. And just as I’m writing, top central bankers from the seven largest economies have announced that they stand ready to act and will provide assistance to the global economy as needed.

Don’t forget to wash your hands.

The Democratic caucus race will reach a point of no return today in a day commonly known as Super Tuesday. 14 states are up for grabs including California and Texas.

By some luck, Joe Biden has received the endorsements of both Butigeg (don’t care how it’s spelled anymore) and Klobercher (never knew how to spell), some much needed wind for old Joe’s tattered sails.

Bloomberg is thinking he can just buy the delegates needed. His self-funded campaign has now reached a record $500 million. Unfortunately, Mike’s got little to show for his investment so far.

Elizabeth who?! She probably should’ve dropped out with the other two.

Socialist Sanders is the clear front-runner. He’s got the most delegates so far but will need a huge win tonight if he hopes to run against Trump. He’s got 60 so far, but he’ll need a total of 1,991 to clinch the ticket. Anything short of that number and he blows it big time. According to the rules, if no candidate gets a majority of the delegates, they go to a brokered convention, meaning that the nominee could be anyone. Biden, Clinton, Obama, anyone!

As far as the markets go, watch Sanders. A very strong victory tonight, and only if by a landslide will make markets very VERY nervous.

Bitcoin and the rest of the crypto market continue to move in a conspicuous correlation with the stock markets and other risk assets. It is extremely difficult to look at this chart and not see the similarities. 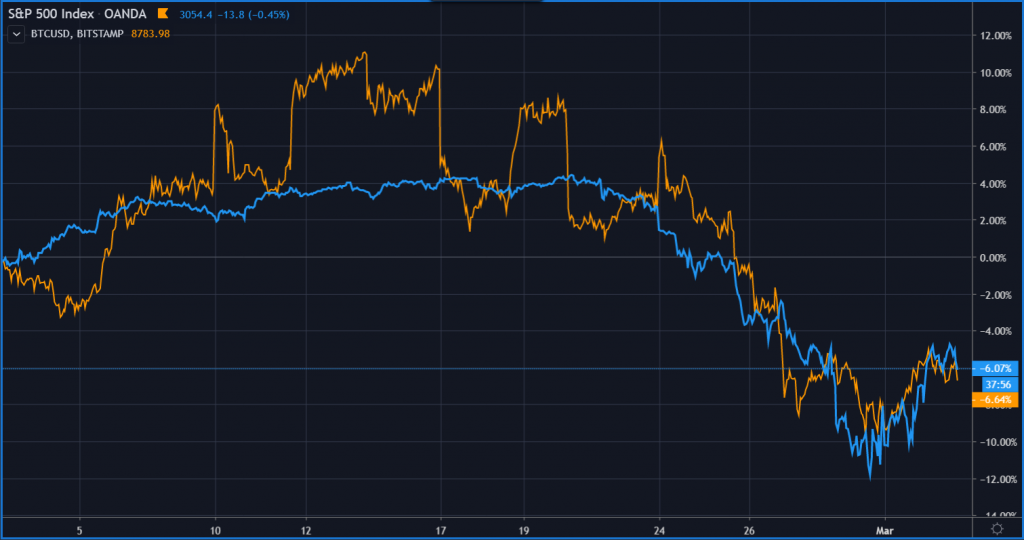 I mean, it’s basically the same chart only with a few added Bart Simpson formations. The arc, the slide, the panic, the bottom, and the bounce have all coordinated quite closely with the 5 stages of the Coronavirus.