Fury and outrage have hit the social media waves of the crypto community as the popular unregulated betting platform known as BitMEX did what it does best and swallowed people’s money.

Here’s one such example of an angry customer…

For once, I actually agree with BitMEX’s decision to not refund their customers. Their reasoning is only half true though. They say that it was caused by ‘market factors’, which it was. The only thing is that they are the ones who created the market.

This type of event is known as a flash crash and they happen fairly infrequently in traditional markets, mostly when there aren’t a lot of trades happening. This particular event saw the price of XRP plunge from 34 cents to 14 cents and then back up in a matter of moments.

It’s prudent to note that these high leverage XRP contracts are quite new to BitMEX and antagonistic comments from the CEO calling XRP dirty names has probably not attracted all that many clients. So the orderbook is likely quite sparse. If you have people selling and there are no buyers, the market price will then drop to the meet the next available buy order. It’s simply how markets are designed.

Though I’m sorry to hear that Marc, and possibly a few others, lost their money here. He does kind of remind me of someone yelling at a crooked carnival operator for rigging their games. Did you have a good time sir?

btw… same applies to every other broker/exchange/casino offering 100x leverage on cryptoassets.

Sinking about the Euro

One theme that I’d like to highlight in the currency market lately is the incredible sinking Euro, which took another leg down yesterday and now sits at it’s lowest level since early 2017.

On the chart, we can observe a steady plodding downward facing channel that, other than for a brief stint recently where I thought the trend might break, has been in play for the last 18 months. 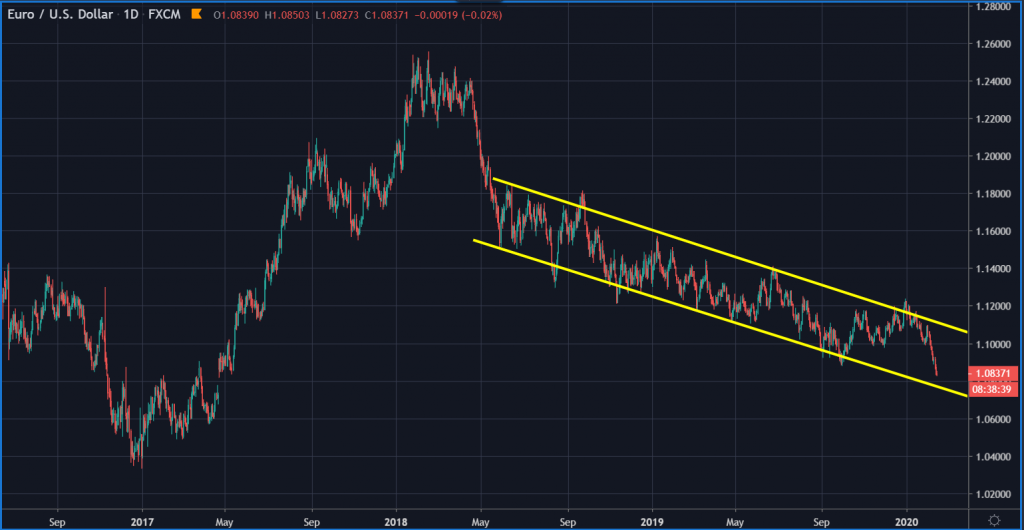 There are many reasons for the slide on a fundamental level. The number one reason it’s going down is because they want it to. In this insane world of upside down economics and currency wars, a country that manages to devalue their own paper is actually considered to be winning.

The Eurozone has been in negative interest rates since 2014 so their actually motivating people to sell it. With the US election coming up quickly, many investors expect the Fed to sit on their hands until at least November and so the Dollar is getting stronger.

Negative economic data from the EU hasn’t helped either, nor has the Coronavirus. It seems that many institutions who might be looking for safety would rather hold their money in Dollars than in the Euro.

Alright, let’s shake off the negativity from the previous two sections. After all, it’s Valentine’s Day…

The gains that have been gained are tight. Taking their time to consolidate. Lines have been tested and broken and tested again. Textbook technical analysis is strong support for sustainable fundamentals. Easy come easy go can break hearts, we’ve been there before. Price stability, now that’s precious. A simple way to save. Separate from a system that discourages saving. Free formation of capital. The promise of a new market. A better market. Where anyone can raise money they need to build with and anyone can invest in the creation of value. Not just the rich getting richer. Not just the rule makers being the rule breakers. A new internet. A new society. A brave new future. But it won’t be easy. We need to fight for it. Need to write about it. Need to tell it. Need to share it. Every day. So that everyone understands. Only then will it be in reach of our hands. Our hearts and minds have hatched a plan. We’re finally winning but it’s not over yet. There are still more battles that must be won. Still more greed and corruption that must be overthrown. The tipping point will come soon and we will all reach a beautiful moon.